Massey Ferguson is rightfully considered one of the leading brands in the global agricultural machinery industry. Its history began in 1847 in Canada, when Daniel Messi began and repair machines for nearby farms in Ontario. Nearly half a century later, My Connection merged its production with Alanson Harris’s Harris horse-drawn vehicle. The company developed rapidly and became the best agricultural machinery in Canada, developing the world’s first self-propelled combine harvester in 1938.

In the same year, Massey Ferguson launched the extremely successful TE-20 tractor, which broke all records for the number of machines sold, with a total of 520,000 units sold since production began. It was on a tractor of this model in 1958 that Sir Edmund Hillary first reached the South Pole, writing his name in history. On three modified Massey Ferguson TE20 tractors, the team of the legendary explorer successfully coped with their task and proved to the whole world the exceptional reliability of this brand’s equipment.

Another victory for the company was the Massey Ferguson 1505, released in 1978, the world’s first electronically controlled linkage (ELC) tractor. Massey Ferguson’s innovative approach ushered in a new era in precision and economical farming with the launch of the first “smart” tractors in the MF 3000 Series in 1986, featuring a new, enhanced electronic control system. It included the Autotronic system, which provided for two power streams and was responsible for the gearbox, PTO and lift, as well as the Datatronic system, which collected data and monitored tractor performance.

The Massey Ferguson brand joined AGCO in 1994, and after another 15 years of fruitful work, opened a new chapter in agricultural development with the launch of the Massey Ferguson 8600 Series tractors, the first agricultural machines to use SCR technology for engines, delivering record high power and economy fuel.

In 2014, Massey Ferguson vehicles were back in the spotlight as the world watched the amazing Antarctica2 expedition. Then Manon Ossevoort (also known as Tractor Girl) on a Massey Ferguson tractor followed the path of Sir Edmund Hillary, proving that nothing is impossible in the world. Thanks to the support of her team and her main partner, the Massey Ferguson 5610 tractor, the 38-year-old actress set off on a journey to the South Pole and overcame the difficult 2,500 km long journey across the polar ice. In total, the expedition lasted 17 days. During this time, both the participants and the tractor have invariably successfully coped with the severe tests that the nature of Antarctica has prepared for them: driving in conditions of a constant polar day, at extremely low temperatures, strong winds and sastrugs, snow storms and fogs. The tractor engine has been running almost without stopping from the very beginning of the expedition. Massey Ferguson not only coped with all the tasks set, but once again became a clear proof of the high quality and reliability of the brand.

Over the more than 150-year history of Massey Ferguson’s existence, over 5 million tractors and 500,000 combines have been produced. Currently, under this brand, about 200 thousand tractors are produced annually, which are popular with farmers all over the world. 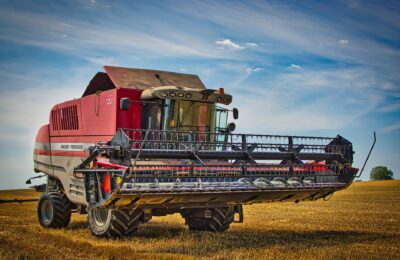